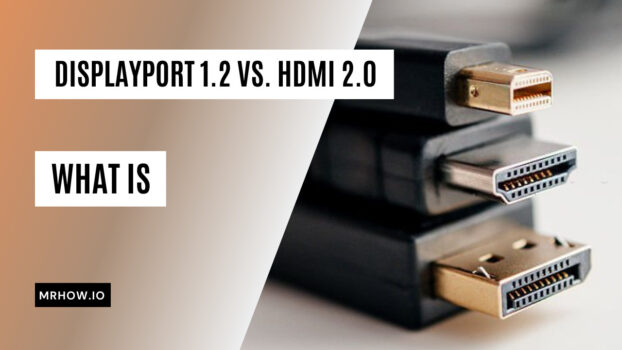 Choosing the right connecting port is critical since it directly affects the resolutions and frame rates when playing games. Many gamers often struggle when choosing between DisplayPort 1.2 vs. HDMI 2.0 for their gaming PCs.

Since each port comes with specific capacities and advantages, picking the better option is not an easy task. In this post, I will discuss their core differences and help you choose the most optimal port for your needs.

HDMI is a prevalent connecting port for TVs, which serves to transmit high-resolution audio and video signals using a single cable. Nowadays, there are many HDMI versions, such as HDMI 1.4, 2.0, or 2.1.

AMD FreeSync users can use HDMI to support VRR, which has grown in popularity since HDMI 2.1 was released.

The selling point of HDMI ports lies in their ubiquity. Since their initial release, these appliances have been available in millions of electronic devices in the world and gradually became the official standard port.

Standard television and computer monitors usually come with 2 to 3 HDMI ports to fulfill users’ needs in the usage process.

An Overview Of DisplayPort 1.2

The Displayport 1.4 has become the most prevalent choice of this connection type. The ability to automatically adjust the refresh rate(VRR) is what makes it stand out from the other ports.

In addition, the Multi-Stream Transport feature (MST) allows users to connect multiple displays using one single Display Port. The port is also compatible with USB type C, which is another advantage of MST technology.

While the HDMI standard requires licensing, the DisplayPort is completely free of charge, making it ideal for regular users.

For this reason, many technologies like G-Sync or DSC were first made compatible with the DisplayPort. In the same class, the DisplayPort also delivers a higher bandwidth.

Therefore, I will always prioritize the DisplayPort for PC usage. Though the DisplayPort data transmitting process consumes more power than HDMI, it should not be too big of a problem for PCs.

Let’s first look at the core differences regarding the basic specs of the DisplayPort 1.2 and HDMI 2.0. Then, I will discuss their pros and cons to help you pick the most optimal option.

In addition, the supported resolution on the DisplayPort 1.2 features wider options, ranging from full HD, 4k, to 5K resolutions. Similarly, the HDMI 2.0 port is also compatible with 1080p and 4K high resolutions.

However, this port allows users to push up to 8K in resolution, while the DisplayPort 1.2 is limited to 5K. Regarding the frame rate, both formats offer 240 Hz when displaying images in Full HD resolution.

The DisplayPort is a better option for 4K monitors since it gives a higher refresh rate of 75Hz compared to only 60 Hz on the HDMI 2.0 port. For this reason, you will get a smoother gaming experience on Ultra HD monitors using DisplayPort.

If you need a more in-depth comparison between the DisplayPort 1.2 and HDMI 2.0, consider watching the video below to find out.

You Should Choose The DisPlayPort For 4K Gaming

DisplayPort and Mini DisplayPort are two types of digital display interface used to connect a computer to a display device, such as a monitor or projector. Both interfaces use the same underlying technology and provide similar capabilities. However, there are some key differences between the two standards.

Mini DisplayPort is the smaller of the two formats, measuring 7.50 mm × 4.60 mm × 4.99 mm. It has 20 pins. Mini DisplayPort was developed by Apple and is used primarily on MacBooks and other Apple computers.

DisplayPort, on the other hand, is a larger format that has dimensions of 16.10 mm (width) × 4.76 mm (height) × 8.88 mm (depth) and also has 20 pins. It was developed by the Video Electronics Standards Association (VESA) and is used by a number of different manufacturers.

Here is a more detailed look at the differences between DisplayPort and Mini DisplayPort cable:

Let’s look at the differences in resolutions between them:

From gaming consoles, and TVs, to PCs, the DisplayPort and HDMI are all available in many versions. To sum up, I would recommend the DisplayPort 1.2 over HDMI 2.0 port for both gamers and regular users.

The advantage of the DisplayPort 1.2 is demonstrated in its superior specs. It brings you a higher max data rate, bandwidth, and a higher frame rate at 4K.

All these features are necessary for PC gamers and users since the 4K monitors are getting more popular nowadays. Though the HDMI 2.0 supports up to 8K resolution, 8K devices are still pretty rare and uncommon. I hope that the comparisons provided in this post can satisfy you. Thank you for reading!

M1 Vs. M2 Macs: Which Is Better For Your Experience?

Best Macbook For College and My Recommendations