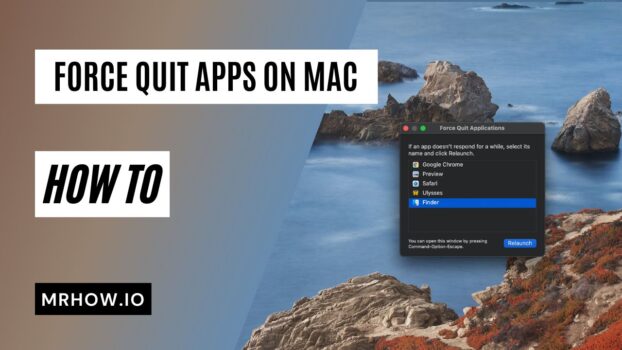 Mac OS X has been around for almost two decades now, and it has undergone some major changes throughout its lifetime. The most recent version, Ventura, was released in 2022 and introduced a new design aesthetic and many new features. Despite its age, macOS is still a popular choice for buyers looking for a reliable and user-friendly operating system.

While using macOS, one of the most popular complaints is how unresponsive some apps can be. If you’re using an app that’s not responding, you can try to force quit it. This will close the app and hopefully free up your system resources so you can continue using your Mac.

There are a few common apps that tend to freeze on a Mac. These include web browsers (Safari, Chrome, Firefox), email clients, and word processors (Microsoft Word, Excel,…). If you’re experiencing this issue with any of these apps, try force quitting them and see if that resolves the issue. Here’s how to force quit an app on macOS…

Read more: How To Reset NVRAM/PRAM and SMC on a Mac

In Windows 10/11, we can use Ctrl Alt Delete to open up the Task Manager and end unresponsive programs. On a Mac, this shortcut doesn’t work. However, there is a similar shortcut that does the same thing (Command + Option + Esc). Follow these steps to use this shortcut: 1. Press “Command + Option + Esc” on your keyboard. This will bring up the Force Quit Applications window.

2. Select the unresponsive app from a new window.

4. Confirm that you want to force quit the application by clicking “Force Quit” again in the pop-up window.

If the first method doesn’t work or you can’t use the keyboard shortcut for some reason, you can also force quit an app from the Apple menu. Here’s how:

1. Click on the Apple logo in the top-left corner of your Mac. 3. Choose a frozen app from the list of open applications.

5. Click “Force Quit” again in the pop-up window to confirm. In some cases, you may not be able to access the GUI (graphical user interface) to force quit an app. If this is the case, you can use the Terminal to kill unresponsive processes. Here’s how:

1. Open the Terminal application. You can find this in the “Utilities” folder, which is located in the “Applications” folder.

2. Type “killall” followed by the name of the unresponsive app. For example, if Safari is frozen, you would type “killall Safari” or “killall Firefox”. 3. Press “Enter” on your keyboard. This will kill the unresponsive process and hopefully allow you to continue using your Mac.

In some case, we have to find a PID number to kill the process. We can find the PID number by using “top” in the Terminal. Once you have the PID number, press Q to exit “top”. Now, we can use “kill” command to kill the process by PID number. If you’re still having trouble force quitting an app, you can use the Activity Monitor application. This is a utility that shows you all of the processes that are currently running on your Mac. Here’s how to use it to force quit an app:

1. Open the Activity Monitor application. You can find it in the Utilities folder, which is in the Applications folder.

2. If the unresponsive app is highlighted in red, this means it’s not responding and you can force quit it. Just follow the instructions above to do so.

Double-click on the unresponsive app’s process in the list to open up a new window with more details about that process. From here, you can also force quit the app by clicking on the “Quit” button in the bottom-left corner of the window. Or you can select the app and click on the “x (circle)” button in the top-left corner of the window.

If the app is still running but unresponsive, you can also Option + Right-click or two-finger tap on its Dock icon and then choose Force Quit from the shortcut menu that appears. You will see the same kind of window as when using one of the other methods described above, and can force quit the app from here.

As a last resort, you can also try restarting your Mac. This will kill all of the processes that are currently running, including any unresponsive ones. Of course, this isn’t ideal if you have unsaved work open in an app, but it’s worth trying if nothing else is working.

How To Restart Your Mac

To restart your Mac, click on the Apple logo in the top-left corner of your screen and select “Restart” from the drop-down menu. Or you can use one of these keyboard shortcuts:

If an app on your Mac is frozen and not responding, don’t panic! There are several ways you can force quit the app and get your Mac back up and running. In most cases, simply clicking on the “Force Quit” button in the Apple Menu will do the trick. But if that doesn’t work, you can always try using the Terminal, Activity Monitor, or restarting your Mac.

Do you have any tips for force quitting unresponsive apps on a Mac? Let us know in the comments!